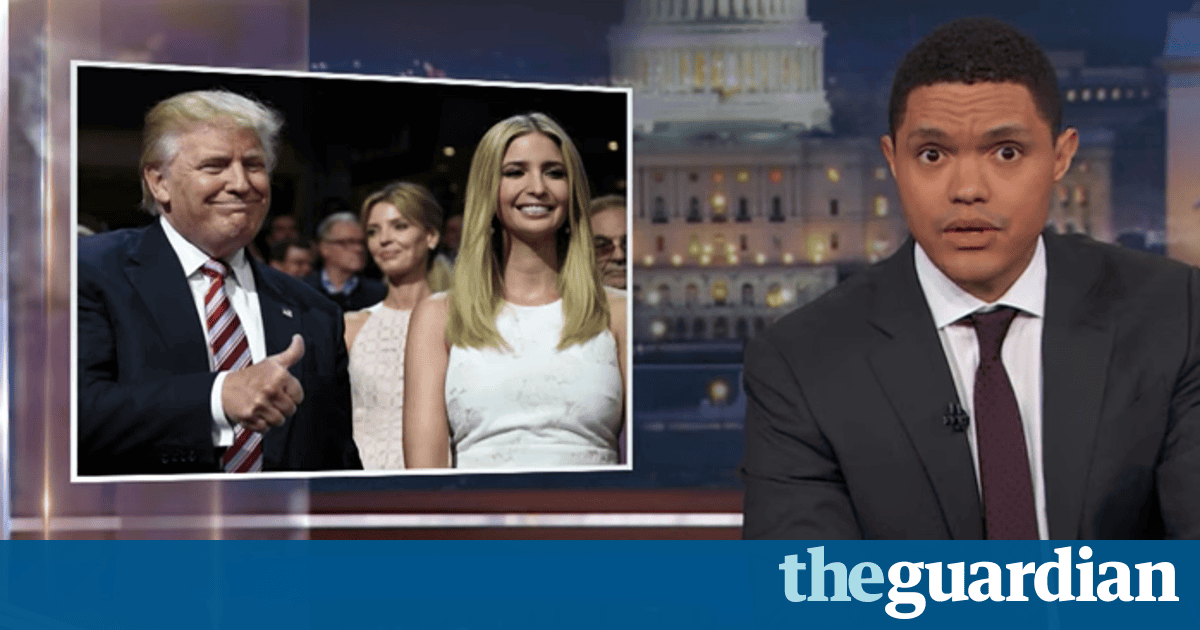 On Thursday evening, late-night hosts took turns pulling apart the most recent controversies surrounding the Trump administration, including nepotism claims about his daughter Ivanka and the ongoing Russia investigation led by Devin Nunes.

On The Daily Show, Trevor Noah spoke about the brazen nature of Trumps appointment of Ivanka Trump to a new unpaid role in his administration. After playing a tape of Ivanka saying she wouldnt ever take a role if her father got to the White House, Noah said: Donald couldnt stand to be apart from Ivanka, you know? In his four-year term, he was eventually gonna find some way to bring her in, but two months? This guy has the patience of a toddler.

A smart man would go for the long con. You know? Trump is the guy standing outside the jewelry store going, And now we wait till the guards go home. Screw it, lets go in now!

He then moved on to the story of Park Geun-hye, the South Korean president who was arrested after a corruption scandal. Wow. A president impeached. Removed from office, and thrown in jail. Imagine that. No, no, seriously. Lets all close our eyes and imagine that.

On Wednesday nights Late Show, Stephen Colbert had focused on Donald Trump attending a womens empowerment event; on Thursday night, he made fun of Trumps relationship with Russia.

All this Russia stuff boils down to one simple question: what is Trumps relationship with Russia and when does he plan to leave it for a younger country? he joked.

He then did a segment called leak-crets, during which he talked to a secret source someone behind a screen whose voice was disguised but looked a lot like Colbert who said the staff at the White House were scared for their jobs.

No, theyre scared theyre going to keep them, came the reply.

Colbert also ripped into Mike Pence after the vice-president said he did not attend events where alcohol was served if his wife wasnt present. Hes so naughty that if you left him alone with a bottle of whiskey, he might try to have sex with it. And Jim Beam and Jack Daniels are both dudes. And hes not into that scene. He has to pray away the Mount Gay.

He then turned his attention to Devin Nunes, and the Democrats call for him to recuse himself from his committees investigation into Russian interference in the US.

Nunes has refused to reveal who [his source] was out of concern that if his source was exposed, hed have to come up with a new reason to keep canceling all the Russia hearings.

Seth Meyers also discussed Nunes: In the House, the investigation is led by the Republican chairman in the intelligence committee, Devin Nunes, who has basically done everything he can to delay or interfere with his own investigation, raising the question of whether hes investigating Trump or working for Trump.

Discussing reports that Nunes may have obtained information about Trumps alleged surveillance from the White House, Meyers joked: Its like when you send yourself an email reminder and two minutes later, go, Oh! A new email.

He moved on to the White House press secretary, Sean Spicer, who he showed struggling to give straight answers to reporters. I bet Sean Spicer fantasises about having an easier job like Bill Cosbys publicist.

He also joked about Trumps low approval ratings in the latest Gallup poll. Trumps approval rating hit a record-low 35%, and this is supposed to be the honeymoon period. Trump should be good at those hes had three of them.

He also discussed the New York magazine story that claimed multiple sources had said they had heard George W Bush say that was some weird shit after Trumps inauguration address. You know things are getting crazy when you can make George W Bush sound like hes on shrooms, Meyers said.